Hot Off the Presses!

Greater Cincinnati Writers League’s 90th anniversary anthology is available for purchase. This volume includes poems from current members, highlighting some of their best work over the past few years. Pricing and ordering information is below. Feel free to share the news! 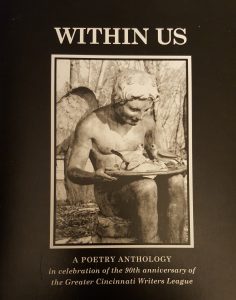 Shipping and handling costs are included in pricing. To order, please email our administrator at gcwlemail@gmail.com, with contact and shipping information. We accept checks, money orders and PayPal payments.

About the Greater Cincinnati Writers League

On Friday, November 12, 1930, a group of writers and musicians gathered by invitation at the home of Mr. and Mrs. William F. C. Tatman to consider forming a club for the purpose of exchanging critiques of poetry, short stories and articles submitted by members.  The Greater Cincinnati Writers League was formed and began meeting on the second Friday of each month. More than 80 years later, it still does.

Twelve active members and an equal number of associate members formed the charter group, notably including George Elliston, an extraordinary figure in local literary history. Elliston was a pioneering newspaperwoman who wrote for the Cincinnati Times-Star for over 40 years. She refused to be confined to the social pages, and was known for going to great lengths to get to the bottom of hard news stories. Throughout her life, her passion was poetry. Upon her death, it became known that she had privately amassed a personal fortune from real estate investments, to the shock of friends because of her simple and thrifty way, and bequeathed virtually all of it to the University of Cincinnati for the support of poetry. The George Elliston Chair on U.C.’s faculty position, as well as the reading room that bears her name continue to honor her.

From the beginning, members of the group were devoted to refining their skills. Appointed critics served a three-month term. Meetings initially were held in members’ homes, and music was always an important part of the agenda.
Eventually, growth in participation made it necessary to limit membership to sixty, and the group found larger quarters for meetings, moving to the Regency on Madison Road in the 1980s. These days, even the spacious trappings of the Regency aren’t enough, and the group has since moved all of its meetings onto Zoom video conference for the foreseeable future.

Through the years, Cincinnatians prominent from other walks of life have nurtured their passion for poetry in the League. The highly celebrated radio host and jazz historian Oscar Treadwell was a devoted member, often featuring work by fellow members on his “Jazz with OT” radio program, which always featured poetry, beautifully read by Mr. Treadwell, along with music.

Although poetry and its role in society have both changed greatly over the span of the League’s existence, the passion and dedication of the poets who gather under its GCWL banner has been sustained; enriched by history, new every month.

The GCWL meets the second Friday of each month via Zoom. In order to join GCWL or request to audit a meeting, call or text Joanne Greenway at 513-374-2874 (or any active member) to indicate your interest. A Zoom link will be emailed to you prior to the meeting. The business meeting starts at 7:00 PM, and critique of poems of members' poems starts at around 7:30. Guests are welcome to attend and observe up to two meetings before payment of dues is required.